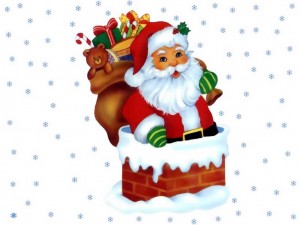 Christmas in the Barn

Only two more days and Christmas would be here! It had been snowing hard, and Johnny was standing at the window, looking at the soft, white snow which covered the ground half a foot deep. Presently he heard the noise of wheels coming up the road, and a wagon turned in at the gate and came past the window.

Johnny was very curious to know what the wagon could be bringing. He pressed his little nose close to the cold window pane, and to his great surprise, saw two large Christmas-trees. Johnny wondered why there were TWO trees, and turned quickly to run and tell mama all about it; but then remembered that mama was not at home. She had gone to the city to buy some Christmas presents and would not return until quite late.

Johnny began to feel that his toes and fingers had grown quite cold from standing at the window so long; so he drew his own little chair up to the cheerful grate fire and sat there quietly thinking. Puss, who had been curled up like a little bundle of wool, in the very warmest corner, jumped up, and, going to Johnny, rubbed her head against his knee to attract his attention. He patted her gently and began to talk to her about what was in his thoughts.

He had been puzzling over the TWO trees which had come, and at last had made up his mind about them. “I know now, Puss,” said he, “why there are two trees. This morning when I kissed Papa good-bye at the gate he said he was going to buy one for me, and mama, who was busy in the house, did not hear him say so; and I am sure she must have bought the other. But what shall we do with two Christmas-trees?”

Puss jumped into his lap and purred and purred. A plan suddenly flashed into Johnny’s mind. “Would you like to have one, Puss?” Puss purred more loudly, and it seemed almost as though she had said yes.

“Oh! I will, I will! if mama will let me. I’ll have a Christmas-tree out in the bam for you, Puss, and for all the pets; and then you’ll all be as happy as I shall be with my tree in the parlour.”

By this time it had grown quite late. There was a ring at the door-bell; and quick as a flash Johnny ran, with happy, smiling face, to meet papa and mama and gave them each a loving kiss. During the evening he told them all that he had done that day and also about the two big trees which the man had brought.

It was just as Johnny had thought. Papa and mama had each bought one, and as it was so near Christmas they thought they would not send either of them back. Johnny was very glad of this, and told them of the happy plan he had made and asked if he might have the extra tree. Papa and mamma smiled a little as Johnny explained his plan but they said he might have the tree, and Johnny went to bed feeling very happy.

That night his papa fastened the tree into a block of wood so that it would stand firmly and then set it in the middle of the barn floor. The next day when Johnny had finished his lessons he went to the kitchen, and asked Annie, the cook, if she would save the bones and potato parings and all other leavings from the day’s meals and give them to him the following morning.

He also begged her to give him several cupfuls of salt and cornmeal, which she did, putting them in paper bags for him. Then she gave him the dishes he asked for–a few chipped ones not good enough to be used at table–and an old wooden bowl. Annie wanted to know what Johnny intended to do with all these things, but he only said: “Wait until to-morrow, then you shall see.”

He gathered up all the things which the cook had given him and carried them to the barn, placing them on a shelf in one corner, where he was sure no one would touch them and where they would be all ready for him to use the next morning.

Christmas morning came, and, as soon as he could, Johnny hurried out to the barn, where stood the Christmas-tree which he was going to trim for all his pets.

The first thing he did was to get a paper bag of oats; this he tied to one of the branches of the tree, for Brownie the mare.

Then he made up several bundles of hay and tied these on the other side of the tree, not quite so high up, where White Face, the cow, could reach them; and on the lowest branches some more hay for Spotty, the calf.

Next Johnny hurried to the kitchen to get the things Annie had promised to save for him. She had plenty to give. With his arms and hands full he went back to the barn. He found three “lovely” bones with plenty of meat on them; these he tied together to another branch of the tree, for Rover, his big black dog.

Under the tree he placed the big wooden bowl, and filled it well with potato parings, rice, and meat, left from yesterday’s dinner; this was the “full and tempting trough” for Piggywig. Near this he placed a bowl of milk for Puss, on one plate the salt for the pet lamb, and on another the cornmeal for the dear little chickens. On the top of the tree he tied a basket of nuts; these were for his pet squirrel; and I had almost forgotten to tell you of the bunch of carrots tied very low down where soft white Bunny could reach them.

When all was done, Johnny stood off a little way to look at this wonderful Christmas-tree. Clapping his hands with delight, he ran to call papa and mama and Annie, and they laughed aloud when they saw what he had done. It was the funniest Christmas-tree they had ever seen. They were sure the pets would like the presents Johnny had chosen.

Then there was a busy time in the barn. Papa and mama and Annie helped about bringing in the animals, and before long, Brownie, White Face, Spotty, Rover, Piggywig, Puss, Lambkin, the chickens, the squirrel and Bunny, the rabbit, had been led each to his own Christmas breakfast on and under the tree. What a funny sight it was to see them all standing around looking happy and contented, eating and drinking with such an appetite!

While watching them Johnny had another thought, and he ran quickly to the house, and brought out the new trumpet which papa had given him for Christmas. By this time the animals had all finished their breakfast and Johnny gave a little toot on his trumpet as a signal that the tree festival was over.

Brownie went, neighing and prancing, to her stall, White Face walked demurely off with a bellow, which Spotty, the calf, running at her heels, tried to imitate; the little lamb skipped bleating away; Piggywig walked off with a grunt; Puss jumped on the fence with a mew; the squirrel still sat up in the tree cracking her nuts; Bunny hopped to her snug little quarters; while Rover, barking loudly, chased the chickens back to their coop.