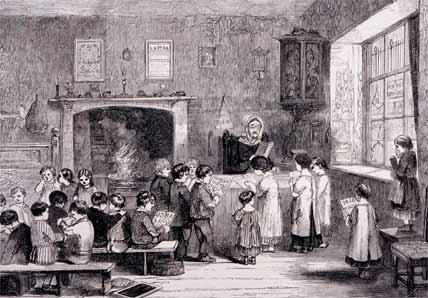 The Can Dos are listening carefully as the historian speaks to them about being children when our country was born.

“If you were to journey back over the highways of history to the year 1776, you would find that most people lived on farms or in small villages. Even cities like Boston, Philadelphia and New York  were small. Back then, people had no electricity, no indoor plumbing, and no automobiles. Rooms were heated with wood fires and lit by candles. Travel was mainly by horseback over narrow dirt roads.

Many American colonists talked of “liberty,” “independence,” and “revolt.” They were weary of Britain’s rule, and their spirit was that of statesman Patrick Henry, who said, “Give me liberty or give me death!” In England, the king and his Parliament responded with more troops and more taxation.
The first battles of the American Revolution took place in Massachusetts in April 1775. By 1776, British troops had occupied the city of Boston, and a new American army was drilling under the command of General George Washington.

By the end of June that year, the Second Continental Congress had passed a Declaration of Independence telling Britain why “these United Colonies are and ought to be free and independent states.”

The Britain-America dispute ripped the colonists apart. Many people wanted to remain loyal to their King. Many others wanted freedom at any cost. The King would not give up the Colonies without bloodshed.

As battles began to rage, daily life went on. Houses were built, fields were plowed, and children went to school when they could.

It is dark when Johnathan’s mother calls him, and he is forced to leave the warmth of his bed. Downstairs, pleasant noises come from the kitchen as his mother prepares breakfast. There will be johnnycake (cornbread), a hot cereal, called mush, and fresh milk. It is the start of another day. Johnathan lives in  New Hampshire, a colony settled only three years after the Pilgrims landed at Plymouth.

When Johnathan finishes dressing, he hurries down to the kitchen. The wood in the fireplace is giving off a good amount of heat,  and the delicious aroma of cooking fills the small kitchen. Johnnycake sits on a clean wooden board before the fire. A kettle of mush bubbles and hisses.

Johnathan has three younger sisters. His sister Elizabeth dresses the younger children in a corner of the room.

When his father comes in from the barn, the family gathers around a plank table. After a blessing, the parents and the children eat and talk of the day’s assignments.

Elizabeth will work on a spinning wheel, while Johnathan will carve new rake handles with his knife. Then both of them will walk to Mistress Robbins’s house for their daily lessons. The younger children will remain at home.

In 1775, many towns in New England closed their schools for the duration of the war. Johnathan and his sister attend a “dame school” for the time being. These are schools run at home by older women in the community.

Mistress Robbins has only rough slabs for seats. The younger pupils are taught how to read and sound out alphabet letters. Older ones memorize passages from the Old Testament. Everyone, including the boys, learns how to sew and knit.

On a warm spring day, three little girls sit in the music room of their North Carolina plantation home. One is playing a keyboard instrument similiar to a piano. Another is playing the harp, while the third plays a flute.

When they finish with their music, the girls ascend a wide staircase to an upstairs room, which serves as a schoolroom.
In the schoolroom, children from neighboring plantations join the girls. Several planters in the area got together and hired a teacher for their children. The girls are taught reading, writing, and fine stitching. The boys are taught reading, writing, and bookkeeping. Their lessons last only an hour.

There are few teachers in the Southern colonies, so these children are fortunate to have a classroom. Many Southern children have only “field schools” to attend. Those are informal, infrequent lessons taught in the open fields by some interested adult.

Before and after school, children have chores, lots of them. Play was a luxury as there was much to do to survive in those early days.

As you leave the homes and schools of 1776 and return to the present day, you sweep past more than two centuries of American history. Not only has the nation changed since its beginning, but so has the manner in which Americans live.

The “Can Dos” clapped when the historian finished his talk. They were silent and thoughtful as they made their way to the fun-filled activities that awaited them…a parade, games in the park, a band concert, a picnic and last, but not least…a fireworks show.

Arthur J was the first to speak. Turning to his friend, he said, “We’re lucky to live now. It wasn’t easy, even for kids, to live back in 1776.”