The Can Do Kids Fund Raise

Miss Sue called a meeting of the “Can Do’ Kids Club at the Community Center to talk about ways to fund raise to help the kids in a town nearby that was hit by a flood. 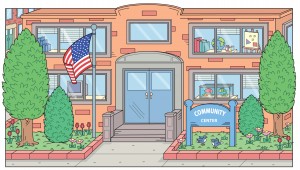 The “Can Do” Kids knew about the flood from their parents  and their teacher, Miss Pat. They all agreed that everyone needed to help that could help because the kids who experienced the flood lost a lot of their belongings. Not only do they need clothes and food and housing, they need school supplies and books.

It was going to be a sad holiday season for many of the kids.

Miss Sue opened the discussion by asking the kids to come up with ways they thought they could fund raise.

Kathy suggested that the Can Do Cooking Club bake and package holiday cookies with the help of the Seniors Club. They would sell the baked goods to everyone who frequented the events at the center, especially when parents came to watch their kids games. Miss Sue said, “That’s a great idea, Kathy.”

Let’s have a show of hands to see if everyone agrees that this is a good way to fund raise.” It was unanimous!

“OK, how else can we fund raise,” asked Miss Sue. Hector raised his hand, and when called on said,”We could have a games day here at the center and all the money we take in from kids and parents will go to help kids who lost their stuff in the flood.”

Miss Sue beamed at the group and said, “You are very generous to want to help the children in our neighboring town. I am very proud of you.”

Willie moaned and Hector groaned and Jay rolled his eyes. Miss Pat ignored them calling on Eulyn asking, “Do you know how Pick-Up Sticks is played”? Eulyn shook her head no.

Orrie called out, “I do, I do my grandpa taught me to play Pick-Up Sticks.”

“Oh Orrie, You’re such a show off,” said Kathy, “You always know the answers”!  Orrie gave her a look and said, “Can I help it if I’m smart and always look things up in Wikipedia”?

“OK class, that’s enough”, said Miss Pat. Everyone settled down and Miss Pat invited Orrie to demonstrate how the game is played. She handed Orrie a bunch of sticks that she had in her hand. They were about 6 to 8 inches long.

Orrie said, “Okay, this is how Pick-Up Sticks is played.”

Then he took the sticks and dropped them in a pile on the table. He told his classmates that the object of the game is to remove a stick from the pile without moving any of the other sticks. The person that has the most sticks when all the sticks are gone is the winner.

The class lined up, waiting to take their turn. Kathy made the pile of sticks move the first time she tried. Annie was doing well for awhile and then she was out of the game because she made the sticks move. It came down to Jay and Maria and…