On day two of camp, the Pre-K  campers got to combine a game with snack time by playing Tic Tac Toe Waffles.

Since Maria suggested the game, Miss Sue called on her to show the campers how the game is played. Maria brought a box to the front table that had a paper plate with a tic tac toe game made out of decorated mini waffles.

Maria invited the campers to gather round the table and watch as Annie and Hector showed everyone how to play Tic Tac Toe Waffles.While Annie and Hector played Maria explained the game, saying, “To play, a camper needs to be an O or an X.  The center of the tic tac toe board is a free space for either player. To win, a player needs to eat a straight line of Os or Xs. Each child in the 2 camper team takes  turns selecting a waffle and putting 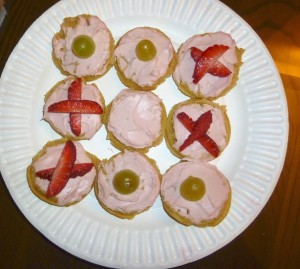 on a separate plate to be eaten after the game is won. The volunteer is responsible for marking the plate where an O or an X waffle is removed .

If, after one member of the team wins, they don’t eat their waffles, then, if the loser finishes his or her waffles, they become the winner.

Maria then asked the volunteers to divide the campers into teams with 2 campers to a team making 5 teams, with one team at a table. Then she asked  that each team have a volunteer to help play the game and keep score. Each team drew straws for who got to go first and select whether they wanted to be an O or an X.

All but one camper finished eating their waffles. She was not happy to lose her place as a winner for not finishing her waffles. But, she learned something about being a good sport and following the rules of the game Tic Tac Toe.