So, it is spring, and many local leagues are starting up. Joining a softball, baseball, or soccer team are all possibilities for the “Can Do” Kids. 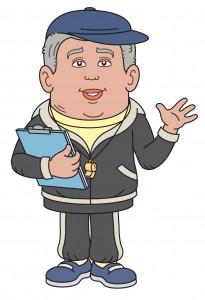 Hey there guys, how are you? What’s going on?

Not much, glad it is finally getting a little warmer. We can go outside more.

That is a good thing, to get out there and let the wind blow through you, move around some more. I see the local leagues are getting ready to start up. How many of you are going to be on a team this spring?

Hey Coach, did you play on any teams growing up?

I sure did. I played football since I was about 8 years old.

I bet you scored a lot of touchdowns, right?

Well, I didn’t run with the football, or throw it, or catch it.

Then what did you do?

I blocked. I was an offensive lineman, and it was my job to make sure the guy across from me did not make the tackle. I had to stop him from getting to the quarterback, the running back, whatever, to take him out of the play so we could score.

So you played football, but you never actually had the football?

That’s right. I did have a very important job though, and if I did not do my job, then the guys with the football could never score a touchdown.

You see, I was part of a TEAM. I had a job to do, it was very important, and if I did it well, then the TEAM could score, and had a chance to win.

That is what a TEAM is all about, everyone doing their job so everyone can win together. After all, there is no “I” in TEAM.

Wow, it’s kind of like the soccer team I signed up for. The coach has me playing defense, so I won’t ever to a chance to score a goal.

Well, someone has to play defense, and if the other team never scores, doesn’t that give your team a better chance to win?

Yeah, but I want to score goals.

I know, I do. Everyone wants to be the hero and score the winning goal, or touchdown, or 2 points…but, there are different kinds of heroes, and all of them are important. If you block 8 shots during a game, isn’t that kind of like you taking away 8 goals from the other team? Isn’t that sorta like being a hero eight times?

I guess. I mean, it’s not like my team could score that many goals. So yeah, I guess it is important that I block the shots.

It is. Believe me, the people who are watching the game, the ones who really know the game, they will see what you are doing and recognize how good you are because you did it. So, you can be an excellent soccer player and never score a goal.

Now, on other team sports, like baseball and softball, no matter what position you play, you will get a chance to hit the ball and maybe score. But, you will have to play a position, and some positions get more action than others. So it is a bit more of a mixed opportunity than say soccer, and football.

What about sports that are more just about “me”?

Well, cross-country running, track, wrestling….those are all very individual focused sports, but there can still be a team aspect. But, unlike other sports, you can be an excellent wrestler, or runner, and be on a weak team. So there is an advantage there, unlike say, football, where you can be a great football player, but be on a weak team and lose every game.

Did you do any of those sports?

I wrestled. Unlike football, when I wrestled, there was no one else to watch. You stand on that wrestling mat alone, just you and the other guy. That is both a little bit scary, and great, at the same time.

Well, on a team, if the team loses…you could blame the team. In wrestling, if you lose, well…it was ALL you. But, if you win, that was all you too. So, you have to take the good with the bad, there is no place to hide. Same for running. If you come in last, well…everyone is going to see that.

So, I guess it really is up to us what kind us sports we should do, huh?

Well, yeah. I would say you should try many different sports, see for yourself what you like and do not like. You may be good at something that right now you don’t think you would be any good at, but you never know.

For some, a team sport is the way to go, for others, well, not so much. The important thing is to get out there, give them a try, and be a good team mate, player, and student of the sport.