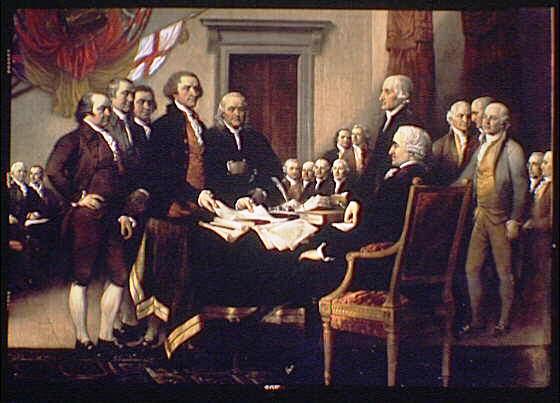 The sun shone; it wasn’t too hot. It was a perfect day to celebrate the 4th and have fun at the “Can Do” Street Community Center.

The 4th of July celebrations started with foot races and games. Jay took first place in his age group for the track race. Willie and Bobby won the three-legged race. Kathy and Eulyn won the sack race. They all received  $25 gift certificates to the “Can Do” Street sports store.

The “Can Do Kids Cooking Club, with the help of the seniors club, turned out a beautiful red, white and blue sheet cake. They also made blueberry smoothies that were the hit drink of the day and in keeping with the colors for the 4th of July.

The play about the signing of the Declaration of Independence was a huge success!

Everyone gave the “Can Do” Kids Chorus a big round of applause for their singing of: God Bless America, My Country Tis of Thee, America The Beautiful and closing with Happy Birthday!

Grandma Hattie won a prize for her strawberry pie at the barbeque supper. Grandma Maureen won for her potato salad and Grandpa Dooley won for the best spareribs.

After it got dark, fireworks professionals put on a beautiful show.

By 10 PM, it was time to head home. The “Can Dos” were tired but happy. It had been a wonderful 4th of July!