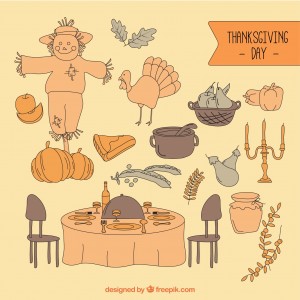 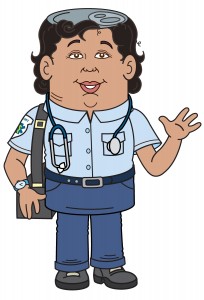 Hector leaned over and whispered in Yundi’s ear. “If my grandma asks if any one knows what an Emergency Medical Technician does, raise your hand and answer. Otherwise she’s going to call on me, and I can’t remember exactly what she does. Then I’m going to be embarrassed and she’s going to be mad at me.” Yundi nodded that he would.

Just then Grandma Frances said, “I’m sure you all know what Policewoman Paula does, but do you know what I do?” Yundi raised his hand, and when called on said, “Last year, when I fell off my bike and hurt my leg and skinned my arm, you came in the ambulance and took care of me. You called my mom and rode in the ambulance with me to the hospital. I was so scared, but you explained why I had to go to the hospital to make sure my leg wasn’t broken.”

Grandma Frances beamed! “That’s right Yundi. My job is to help boys and girls and adults when they need medical attention because they had an accident or are very sick . I come by ambulance along with another Emergency Medical Technician, and help care for the child or adult on the way to the hospital.” 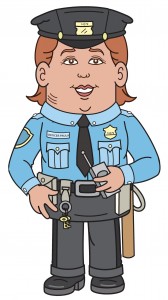 Policewoman Paula began the street smarts discussion. “We have a series of questions. When we we finished the questions, we will give you the answers. Please think about what you would do in each situation.

The “Can Dos” were all quiet as they thought about what to do. Then Grandma Frances and Policewoman Paula began calling on each ” Can Do”and asking them what they would do. Some of their answers were not so good, not so safe choices. Some of the “Can Dos’ did not have street smarts.

Here are the Street Smarts answers:

Grandma Frances and Policewoman Paula said goodbye to the “Can Dos” reminding them to always practice street smarts.

Orrie Wants to Play a Sport

All the other “Can Do” Kids play a sport and Orrie wants to play a sport too. He plays basketball with his dad in the back of his house but that’s not the same as being on a team and playing against other teams.

Orrie was sitting around with some of his buddies, asking them what they thought he could do.

Hector suggested that he talk to Coach Campbell about what other kids do who use a wheelchair and want to play a sport.

Orrie thought that was a good idea, so he wheeled himself down to coach’s office and made an appointment to see him. When he met with Coach Campbell he shared his feelings, saying, “I want to be like my friends. I want to play a team sport and have my family and friends come root for me.”

“Well Orrie,” said Coach Campbell, “I can understand your wanting to be like your friends and play a

sport but you need to like a sport if you hope to do well at it. Let’s talk about what sports you think you might like. Then we can talk about how you can try them out to see which one you really like.”

Help Orrie to play a sport by picking out the sports that kids who use wheelchairs can play. Circle the sports you think Orrie could play:

Answer – If you circled all the sports, you would be right!”

“Orrie,” said Coach Campbell, “Next time we get together I will have places we can visit to see these sports being played. We need to let you try out the ones that look good to you. We also need talk about sports that you can be part of out of your chair like horseback riding and competitive swimming.”

Orrie left Coach Campbell’s office feeling confident that he was going to get to play a sport.