Miss Pat had the “Can Dos” gather round her and read the following tips for being safe on Halloween night.

“It’s fun going from house to house to collect as much candy as possible before your bag bursts.

This year, make sure you have an extra safe Halloween night with these trick-or-treat tips.

Now you’re all set to go out and collect as much Halloween candy as you can!”

Who Got to America First?

The “Can Dos” are having a hard time paying attention in class. All they are thinking about is the three day weekend coming up, and all the fun they will have with three days off.

Miss Pat decides to use the coming holiday weekend to teach a lesson about what explorer got to America first.

Miss Pat asks,”Who knows why we are going to have a three day holiday weekend ?” Bobby raises his hand and answers, ” It is in honor of Christopher Columbus, an explorer who discovered the New World…where we live…in North America.”

“Very good, Bobby. Do you know where his ship made land?” Bobby thought for a moment and said, “I think it was the Bahamas.” Miss Pat pointed to the large map that hung on the wall and said, “Bobby is right, Columbus landed in the Bahamas.

Now I have an even bigger question. Was Columbus the first explorer to land in North America?”

The class grew silent, but not for long. Orrie raises his hand and said, “About five hundred years before Columbus landed in the Bahamas, a Viking, named Lief Ericson, led an expedition from Greenland to North America.” 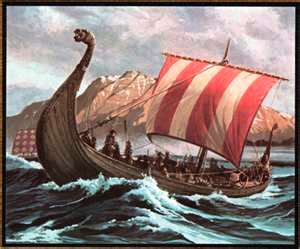 “Excellent Orrie,” said Miss Pat, “Let me tell you what we known about Lief Ericson.”

Miss Pat began,”Lief Ericson was an explorer who led what is believed to be the first expedition to the mainland of North America. He was a Norseman, also called a Viking. The Vikings came from Norway, Denmark and Sweden. He was the son of a man called Eric the Red, who created the first settlement in Greenland. When Eric died, Lief took over as leader of the settlement.

It is believed that Lief sailed west from Greenland in 1002 to find land that had been sighted by a Norse sea captain. While he first landed at a level stone area, he then sailed further south to a heavily wooded area and then went ashore farther south, where grapes were growing. He called this new land Vineland. Lief and his men spent the winter there. On there way back to Greenland, they rescued sailors that were shipwrecked.

No one knows exactly where Ericson landed on his voyages because he didn’t make any maps. However, some historians believe that he may have landed on the island of Newfoundland, on the continent of North America.”

“Wow,” Willie says, “That’s some story. If only Ericson made some maps  of where he landed in North America, maybe he would be a famous explorer just like Columbus!”