Table-top Marbles on a Rainy Day

The “Can Do” Kids tumbled into Grandpa John’s house when he opened the front door. Hector shouted out, “We’re here to learn how to play marbles like you did in the olden days.”

Grandpa John smiled and said.” We are all set up for a game called Marbles in the Box. Follow me to the playroom. Orrie is already there.”

Orrie was sitting at a long table.  At the end of the table was a tissue box with a whole cut in the bottom. The side with the whole rested on the table. 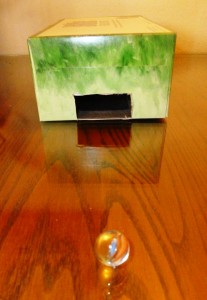 Grandpa Dooley was there to help out, He handed each of the “Can Dos” a small bag with 5 marbles.

“Now everybody take a seat while I explain the rules”,  said Grandpa John. “When I was a kid we played this game in a playground area that had a flat surface. Sometimes, when the weather was bad, we played it indoors on a long table, just like we are doing today.

The rules are : 5 players can play at any one time; each player gets 5 marbles to play with. The 6th player is the Marble Master.

6. The only way you can get the marble into the hole is either by flicking it:

Now that you know the rules, let’s pick a Marble Master and play “Marbles in the Box.”  The group voted for Willie to be Marble Master.

Arthur J. won by having the most marbles when Willie, the Marble Master, ran out of marbles.

Ready to try this game at home? All you need is a box with a hole in it and marbles! Be sure to check out the marble game in the “Can Do” Club House.

Coach and Jay Talk About Being a Good Sportsman

“Hey Jay,” said Coach Campbell, “I watched your ping pong game with Bobby this morning and I could tell from far away that you lost. I watched you throw the ping pong paddle down in anger and storm off from the game room yelling and kicking.  It was like you “melted down.”

Did Bobby say something that made you angry, or where you just upset that you lost the game?”

“Just that I lost the game,” answered Jay.

Coach Campbell nodded and said, “Look Jay….no one LIKES to lose…but, part of playing the game is knowing that you might lose. I mean it is a game and someone wins and someone loses, but you can’t let losing make you put on a show like this morning. You have to be a good sportsman.”

“Ha, well…let’s see,” said Coach, “A sportsman is someone who even in defeat acts with grace.”

Hmm, said Jay, “Is defeat the same as losing?”

Coach thought for a moment and then said, “Being someone who had fun playing the game and wants to play again. The game, that’s the fun part. Sometimes you win and sometimes you lose, but…you keep playing and that keeps you getting better…being better.”

Jay’s face brightened and he said, “Oh, I see.”

“Good,” said Coach.  “Look, next month there is a big ping-pong tournament and I think you can do well and maybe even get to the finals.  If you work hard and keep learning from your mistakes, it can happen.  But, I need to know you will not ‘lose it’ like this morning if you lose…will you be a good sportsman?”

Jay asked, “You really think I can do well?”

“Yes,” said Coach, “But you have to give me your word you will be a good sportsman.  No more melt downs.”