“Ever since I was a little girl I’ve  wanted to see Prince Edward Island and now I am here,” answered grandma. “Here is where my favorite childhood story took place. Oh, it wasn’t a true story, it was fiction, but the author used the places and the things and the people as they were in 1878 on Prince Edward Island  to tell a story about an orphan girl that comes to live here. The orphan girl is Annie Shirley and the book is Anne of Green Gables. It was written by Lucy Maud Montgomery who used her own childhood memories growing up in rural Prince Edward Island to write the book. Since it was published, in 1908, it has sold over 50 million copies.”

“I never heard of it , grandma,” said Arthur J. Grandma looked sad for a moment and said, “That’s too bad. When I was a girl Anne of Green Gables was required reading for school.”

After the tour of Green Gables, grandma took Arthur J, Kathy and Annie on a walking tour of Charlottetown, the main city on Prince Edward Island. There, on one of the corners in the downtown area was a store totally devoted to Anne of Green Gables. It had books and DVDS, music, clothes and, of course, dolls. They had a great time exploring the store for over an hour.

Arthur J took Kathy and Annie aside when grandma wasn’t looking and asked the girls to keep grandma busy while he bought her an the original story of Anne of Green Gables. The girls took grandma over to another section of the store and Arthur J bought the book with spending money his parents gave him for the trip. He hid it in his backpack.

Later that night, just before bed, Annie asked grandma to read them a story. “I don’t have any books with me,” said grandma. Arthur J reached into his backpack and pulled out the gift-wrapped book.

Grandma’s eye’s misted over as she opened the package and saw the book…Anne of Green Gables. She hugged and thanked her grandchildren for their thoughtfulness and said, “Under the covers you go, children. Where are my glasses? It is time to return to an earlier time and join Annie Shirley in her new life on Prince Edward Island.

For more pictures of Anne of Green Gables go to http://greengables-1.tripod.com/pictures/ 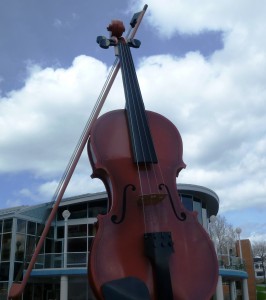 Arthur J, Kathy and Annie were so excited as they

made their way into the cruise terminal with Grandma Maureen.

Their cruise ship looked so tall and long to them !

The night before their parents saw them off at “Can Do” Airport. They flew to New York City where they spent the night in a hotel. It was their first time on a plane and they loved it! They watched a movie and had a snack on the plane.

When they got in the cruise terminal, they had to go through a security check. Then they had their pictures taken and were given an ID card to wear on board.

When they got on the cruise ship they couldn’t believe their eyes! It was beautiful! Their stateroom had a small sitting area, bathroom, refrigerator, TV and bedroom area with four beds and an outside balcony. Kathy said, “I love this cruise already.”

Everyone quickly unpacked so they could have lunch in the buffet restaurant. For dinner they would go to the dining room. Kathy said, “Grandma, you went over dining room manners, but what do we need to know about eating in the buffet restaurant”?  Grandma Maureen thought a moment and said, ” Just use you school cafeteria manners and you will be fine.” Arthur J looked nervous and said, ” Um, my cafeteria manners aren’t so good. Please tell me what I should and shouldn’t do.”

Grandma Maureen sat Arthur J, Kathy and Annie down and went over the following manners for cruise buffet dining:

The “Can Dos” were amazed to see all the foods they had to choose from in the cruise buffet…salads, fruits, sandwiches, hot meals, breads, cakes and cookies.  They tried a little bit of everything and then went out to the ice cream bar and got cones.

After lunch they signed up for a crafts activity and Grandma Maureen took a nap. After the craft session, they all went swimming and then back to their room to change for dinner.

Soon it was time to use their cruise dining room manners. They were seated with a grandma and grandpa traveling with their grandchildren, Billy and Julie who turned out to be around the same age as Kathy, Annie and Arthur J . By the time dinner was over, they were all friends. The kids went to an evening movie in the kids cruise camp and Grandma Maureen went to a show in the theater with her new friends from dinner.

That night, as the kids were falling asleep, they all thanked Grandma Maureen. Arthur J spoke for Kathy and Annie when he said, I can’t wait until tomorrow. Taking a cruise is the best!”

Grandma Maureen invited Kathy and Annie and Arthur J for dinner to talk about the cruise they were going to take together.

Grandma Maureen is so excited about winning a cruise for four to Canada. She’s thrilled to be able to treat her three grandchildren as a reward for their good grades. She wants to make sure they know what to expect on a cruise and know

how they need to behave.

Grandma Maureen set the table the way it would be in the dining room on the cruise ship and she played the part of the waiter.

Arthur J, Kathy and Annie practiced how to order from the menu that Grandma Maureen made for them. During dinner they brushed up on their table manners to make sure they knew when to use what fork during meals. Grandma gently reminded her grandchildren to; cover their mouths when they burped and say excuse me, not talk with their mouths full, and cut their food in bite size pieces before trying to eat it.

While her grandchildren ate ice cream and cookies as their treat, Grandma Maureen shared about cruise camp where they would meet other children their age, play games, go swimming, see movies and do other activities during the days they were at sea. On the days they were in port, in different places in Canada, they would take tour buses and visit interesting sites and eat lunch out.

Annie asked, “Are there any special manners we need for the cruise other than table manners”? Grandma Maureen smiled and said, “Why yes there are. Let’s go over cruise manners right now:

“Wow, grandma, that’s so much to remember,” said Arthur J. “Don’t worry, I’ll be there to remind you of your cruise manners,” said Grandma Maureen with a smile.

Coach Campbell was already in the classroom when the “Can Do:” Kids arrived for the start of the school day. He greeted the students and asked that they take their seats so he could begin talking to them about summer safet

“Summer is a wonderful time of the year,” said Coach Campbell. “A time for summer fun playing games, going swimming, riding bikes and skateboards, playing sports like baseball, going to camp and visiting friends and family. Summer is also a time when children who don’t practice summer safety rules can have accidents and wind up not having so much fun. So, let’s review some summer safety rules to be sure all of you have a great summer.”

The class all nodded. Coach began by reviewing water safety. He reminded the class to:

The “Can Do” Kids all nodded their heads to let Coach know they understood and would practice the water safety rules he shared with them.

Coach then moved onto safety rules for games, sports,  riding bikes, skateboards and scooters by reminding the class to:

Coach ended his summer safety talk by wishing everyone a safe and fun summer.